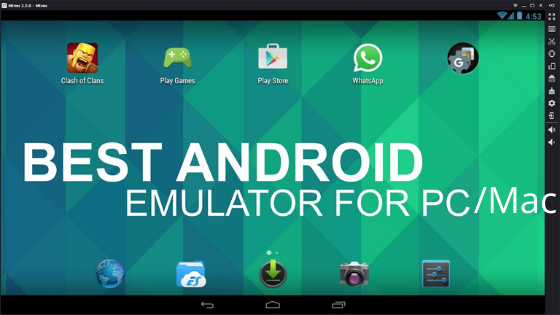 There has been a massive increase in the total number of apps being released on the Android play store in the past couple of years. The quality of these apps has also improved over time because we have witnessed voice-guided apps using AI to perform tasks in our surroundings and numerous gaming apps for playing graphics-intensive games that exceed console quality!

With these apps providing so much more right into our handheld devices, sometimes there does arise a need, for example when you might require a bigger screen for viewing content.

To remedy such needs, the developers have designed several Android Emulators that can run all these android apps with nearly full compatibility on our PC and Mac devices.

Let’s waste no more time and check out these 5 best Android Emulators for PC and Mac!

Bluestacks is a popular Android Emulator that is used by more than a million people all over the world because it runs Android 4.4 Kitkat which supports billions of apps collectively. You get a pre-installed Play Store within the emulator that makes finding and installing apps a breeze. Moreover, it supports direct streaming to your Twitch and Facebook account which can benefit those who are planning to become Youtubers or start their streaming careers.

Andyroid is a free Android Emulator that is being used by millions of users worldwide as it runs Android 4.2.2 Jelly Bean with full-screen compatibility in almost all the apps that you can find on the Play Store. Furthermore, you can freely resize the application’s window and the running app will automatically re-adjust the resolution without freezing or crashing. You could also connect your phone with the emulator to navigate or load apps into your device directly!

A good alternative to the popular Android Emulator – Bluestacks is the Nox App Player. It’s built on the Android 4.4 Kitkat system which also allows you to change the total dedicated cores and accessible RAM. Besides the ability to lock your FPS you can also choose between two graphics rendering modes i.e. DirectX or OpenGL. You can also install apps through either the inbuilt Play store or by simply dragging and dropping the APK files at the home screen!

This special Android Emulator named Remix OS Player can also be installed as an OS on both Mac and PC as it ships with a comparatively advanced Android 6.0 Marshmallow that supports even more apps than that of older android versions. The emulator provides several shortcuts that enable key mapping and split-screen that could prove to be handy when used for gaming purposes.

This Android Emulator is specifically designed for PC to run Android 4.2 Lollipop which can be further upgraded to Android 5.0 Nougat. You get a pre-installed Play Store in MEmu with several useful tools such as screen recorder, kill-process manager, key mapping and automate touch-screen actions. All the APK in your system is by default associated with MEmu to run just like any other windows executable file.

Read: Best GameCube Emulators for PC You Must Try

These Android Emulators provide the best features in the market while also being a safer choice to use at both your home and your workplace. Any of these Best Android Emulators for PC and Mac will meet all your needs to be used by you in your day to day lives!